What’s the Difference Between HIV and AIDS? Insights, Tips and Resources 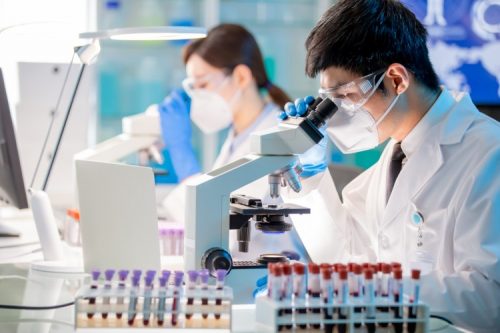 Today in the U.S., tens of thousands of people are living with a potentially deadly disease that they don’t know they have. Early diagnosis not only reduces the severity of the disease and risk of death but is also key to slowing and eventually stopping the spread of the disease.

Since the initial AIDS outbreak in the U.S. in the early 1980s, more than 700,000 people have died from the disease in this country, according to the Centers for Disease Control and Prevention (CDC) HIV surveillance reports. Our World in Data reports that based on data from the Global Burden of Disease, a global epidemiological survey, each year nearly 1 million people worldwide succumb to the disease. While infection rates and deaths continue to decline in many parts of the world, AIDS is now the leading cause of death in some parts of sub-Saharan Africa, accounting for 50% more deaths than heart disease and twice the number of cancer deaths.

From the beginning of the fight against HIV and AIDS, public health officials have led the effort to stop the spread of both through education. COVID-19 presents new and serious challenges for people living with HIV, which makes the need for proper HIV and AIDS education more pronounced than ever.

The resources in this guide help individuals, families, caregivers and public health officials gain the upper hand in addressing this serious threat to public health.

Understanding the Difference Between HIV and AIDS

The U.S. Department of Health & Human Services (HHS) explains that HIV attacks the cells that help our bodies fight off infections. Without these cells, we’re more susceptible to infections from other sources, including other viruses. That’s HIV’s insidious nature: rather than being fatal itself, it destroys the body’s ability to stave off other diseases that can ultimately cause the person’s death.

Efforts to combat AIDS rightly focus on prevention, but successful treatments are now able to boost the immune system of people who contract HIV and prevent the virus from attacking patients’ natural disease-defense mechanisms.

Definition of HIV and AIDS

By impairing the body’s ability to fight infections, HIV makes the people it infects more susceptible to many other diseases and infections. If the people who contract HIV don’t receive treatment, they may ultimately develop AIDS.

HIV is a retrovirus, which is a type of virus whose RNA genetic material replicates inside the host cell, as Healthline explains. HIV uses a reverse transcriptase enzyme to convert its RNA into DNA that’s compatible with the host cell.

At present, HIV has no cure, nor any way to completely remove the virus from a person’s system. However, not everyone who’s infected with HIV develops AIDS. Antiretroviral therapy (ART) allows people with HIV to live long, healthy lives and prevents them from spreading the virus to others.

Difference Between a Virus and a Syndrome

The National Human Genome Research Institute describes a virus as a small bundle of genetic code, whether DNA or RNA, wrapped in a coat of protein. Viruses are unable to replicate on their own, so they depend on parts within the cells they infect to create copies of themselves. The replication process typically destroys the host cell and damages the host organism.

HIV.gov identifies AIDS as the “most advanced stage of HIV infection.” AIDS is diagnosed in two ways:

How an HIV Infection Develops into AIDS

As Medical News Today explains, a person with HIV who follows an “effective treatment regimen” is unlikely to have the virus lead to AIDS. However, if HIV is untreated, the person’s immune system will continue to be damaged. The more compromised the immune system becomes, the more likely the person will develop an opportunistic infection.

The opportunistic infections that are most likely to affect AIDS patients include the following:

Early HIV treatment prevents the virus from leading to AIDS. HIV.gov explains that treating HIV entails taking medications that slow the virus’s spread in the person’s body. ART is the recommended treatment for people with HIV — no matter how healthy they are or how long they’ve had HIV.

By contrast, no singular approach exists for treating the opportunistic infections that arise as a result of AIDS. Medical News Today describes the three stages of AIDS (note that not everyone who’s infected with HIV experiences these or other symptoms):

Misconceptions Regarding HIV and AIDS

From the earliest days of the AIDS epidemic, the disease has been clouded in mistruths and half-truths that led to people with HIV and AIDS being stigmatized. Nearly 40 years later, as HIV continues to spread around the world, misinformation about the condition proliferates.

One of the greatest challenges public health officials face in educating communities about HIV and AIDS is overcoming these misconceptions. Government agencies, non-governmental organizations and healthcare providers highlight the importance of disseminating accurate and timely information to the public, and especially to the segments of the population most likely to be infected with HIV.

HIV as a Terminal Disease

Treatment of HIV and AIDS

Educating the Public About HIV and AIDS

Healthcare professionals play a vital role in helping people understand the differences between HIV and AIDS. Statistics reported by the CDC demonstrate the positive effect that public education about HIV and AIDS has on new infection rates:

Dispelling Misinformation About HIV and AIDS

By taking appropriate precautions, people can nearly eliminate their risk of contracting HIV. The goal of public health outreach is to disseminate precautions about HIV and AIDS, including dispelling misinformation that conflates HIV and AIDS. HIV.gov lists the tools currently available to combat the spread of HIV and AIDS:

Among the strategies that are effective in promoting risk-reduction strategies for people with HIV are media campaigns, behavioral interventions and medication reminders.

Calming Fears Without Trivializing Their Seriousness

The first fear can be dispelled by educating people about the limited ways that HIV can be contracted:

Taking an HIV test is simple, confidential and painless, requiring only a small amount of blood or a mouth swab. Avert’s HIV testing information page walks through the testing process and explains what to do after receiving the test results.

To overcome the stigma that may be associated with a positive HIV test result, people can learn about how others are living full, vibrant lives after a positive diagnosis with the support of family, friends, healthcare providers and community groups.

The cornerstone of efforts to prevent the spread of HIV and AIDS is widespread testing. As stated above, approximately one in seven people in the U.S. with HIV don’t know they’re infected. Educating people about the need for testing and for appropriate precautions after testing positive would reduce the rate of infection substantially, according to the CDC.

By delivering a timely diagnosis, testing allows people with HIV to receive the treatment they need to maintain a healthy immune system and keep AIDS at bay. HIV.gov emphasizes recent improvements in HIV testing that identify infections sooner, which reduces the chances of the person transmitting the disease during the acute phase of the infection when viral loads are highest and the risk of another person contracting the virus is highest.

The National HIV/AIDS Strategy for the United States: Federal Action Plan, which the federal government originally published in 2015, was updated in 2020. The plan highlights the important role played by community-based organizations (CBOs), healthcare providers and informal networks of people who have HIV in achieving the goal of making new infections rare and ultimately nonexistent.

Another important goal of the federal strategy is to ensure that everyone who’s living with HIV has access to quality care and has the opportunity to live a full, healthy life free of discrimination and stigma. The plan calls for the CDC to support “community mobilization efforts” to strengthen CBOs’ social network strategies. It also recommends national campaigns targeting segments of the population who are at the greatest risk of contracting HIV.

Resources for HIV and AIDS Education and Prevention

Education is central to the goal of treating, preventing, and ultimately eradicating HIV and AIDS. The strategy for achieving that goal unites community organizations with research and social services agencies at all strata of government. The organizations are among the HIV and AIDS resources available to public health educators and the public.

Use of Online Tools for HIV and AIDS Education

The CDC’s “HIV/AIDS Prevention Tools” page features links to prevention programs available from the agency and from its partners:

As more therapies and techniques become available to combat HIV and AIDS, it becomes more challenging to measure the effectiveness of specific approaches, which typically combine a mix of methods:

The CDC provides best estimates of the effectiveness of HIV prevention strategies based on a review of the scientific literature. The following are among the strategies that are analyzed for their effectiveness:

HIV.gov provides an in-depth review of the official federal government response to the HIV/AIDS epidemic titled Ending the HIV Epidemic: A Plan for America.

The greatest challenge to HIV and AIDS education efforts in the U.S. and worldwide is the COVID-19 pandemic. Friends of the Global Fight Against AIDS, Tuberculosis and Malaria examines the impact the coronavirus has had on the most vulnerable communities who suffer the highest rates of HIV/AIDS as well as tuberculosis, malaria and other infectious diseases.

When the AIDS epidemic began 40 years ago, the goal of governments, researchers and healthcare providers was to stop it from spreading and develop effective treatments. Today, the challenges are much different, as a recent United Nations meeting on AIDS discussed:

Resources for Educating the Public About HIV and AIDS Intervention Strategies

Public Health Educators Lead the Fight Against HIV and AIDS

Achieving the goal of eliminating HIV and AIDS in this decade will require a well-orchestrated effort involving agencies and legislatures at every level of government, as well as community leaders and healthcare providers. Public health educators are on the front line in the battle to ensure that people with HIV receive effective treatment and to educate vulnerable populations in particular about how to tell the difference between HIV and AIDS, and how to prevent both.