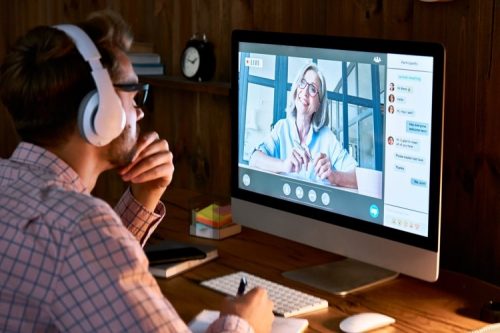 When she was a little girl in Beaver County, Pennsylvania, Megan Burry knew what she wanted to be when she grew up: a nurse. Her mother, Kathy, was a nurse, and Megan enjoyed listening to her mother’s stories of work.

“Nursing has always been inside of me,” Burry says.

What she didn’t know was that nursing would lead her into education as well — and that one day, she would teach aspiring nurses.

Today, she works part time as an in-person clinical instructor in the online Nursing Education and Faculty Role Post-Master’s Certificate program at the Duquesne University School of Nursing. When she’s not teaching, she’s pursuing an MSN in Nursing Education at Duquesne.

Burry started on her career path right out of high school. As a patient care associate at a local hospital, she performed functions such as taking vital signs and preparing patients for surgery.

The opportunity confirmed for her that she wanted to work in acute care. She took pleasure in tasks as simple as bathing patients and watching the smiles that came to their faces. She observed nurses interacting with doctors and thought to herself, “I wish I could do that.”

To move toward that goal, she became an anesthesiology technician at the Cleveland Clinic. While she gained skills in operating rooms, she was also getting a cultural education, learning to work with colleagues and patients of other races, ethnicities, religions and languages.

“People from around the world would go to the Cleveland Clinic to get their care,” she recalls. Her patients also included celebrities such as the late actor Robin Williams, whom she helped prepare for open-heart surgery.

Learning How to Learn

After two years in anesthesiology, Burry felt ready for nursing school. She earned her RN diploma from the Jameson Memorial Hospital School of Nursing in New Castle, Pennsylvania.

In the process, however, she encountered an unexpected difficulty. She was diagnosed with a learning disability, which manifested itself in stuttering and being slow to process complex information.

Instead of allowing her disability to discourage her, Burry took it as a challenge. She developed coping strategies, such as breaking down complicated concepts into simpler ones and finding ways to relate them to her everyday life.

When encountering a tongue-twisting word such as “scopolamine” — an anti-nausea skin patch — she would split it into smaller words and repeat them to herself until she could pronounce the entire word smoothly.

Looking back, Burry believes those hardships helped to equip her for teaching. She empathizes with slow learners, and she shares techniques she’s used to help herself.

“I remember how hard nursing school was for me,” she says. “I don’t want anybody to go through what I went through alone.”

From Student to Teacher

As a new registered nurse, Burry picked up experience in a variety of settings. The most challenging was Aspire Health, a nationwide medical system bringing home care to patients with serious illnesses, from chronic pulmonary obstructive disorder to cancer. Many had conditions that no longer responded to treatment. She assessed such patients for receiving palliative care, which could relieve their symptoms and improve their quality of life.

Many of her patients were in other states, at the other end of a phone. Beyond asking about their symptoms, she learned to listen for telltale signs, such as wheezing or running out of breath before finishing a sentence.

The demanding nature of the work motivated her to return to school for a bachelor’s in nursing. While she pursued her studies online, she struck up a fortunate friendship.

The friend was Dr. Jessica Devido, an associate nursing professor at Duquesne, whose daughter went to school with Burry’s older daughter. “Dr. Devido would see me at the ball fields with my books, sitting in the chair doing my homework,” Burry recalls. “She would always ask what I was doing. When I said I was working on my bachelor’s, she would say, ‘Oh, when you’re done, and you’ve graduated from that program, let me know.’”

Within months of graduation, Burry joined the faculty at Duquesne as a clinical instructor. It was her first exposure to teaching, she says. “I didn’t know that I was going to love teaching as much as I do,” she adds.

Two days a week, Burry instructs nursing students in practical clinical skills. She teaches everything from the proper way to make a bed to how to give injections.

“Students come in for hands-on learning,” she says. “They apply what they learn in theory to real life.”

Remembering her own trials in nursing school, she especially enjoys helping students deal with difficulties. She invites them to contact her with questions, even after they’ve finished her course.

She’s found teaching so rewarding that she’s decided to become a student again, seeking a master’s in nursing education at Duquesne. In one course, she studies how to put together a lesson plan. In another, she delves into pharmacology so that she can better explain medications to future students.

“It’s about learning how nurses learn,” she says.

Burry has more personal reasons for pursuing higher educational goals, she adds. One is her mother, her biggest fan, who encourages her to pursue advanced degrees. Her two daughters also drive her to aim high.

“I want to set a good example for my girls,” she says. “I don’t want to show that it’s OK to give up and be satisfied with where you are. I used to say to myself that when I got my RN, I would be done. Well, I just kept going.”

Advance a Nursing Career With a Post-Master’s Certificate

Burry’s story shows how pursuing higher levels of education can open doors to new and rewarding careers for experienced nurses. It also shows how they can pursue those levels while still working.

How to Teach Nursing Students Online: Tips and Resources for Nurse Educators

What Are the Nurse Practitioner Specialties Nurses Can Pursue?