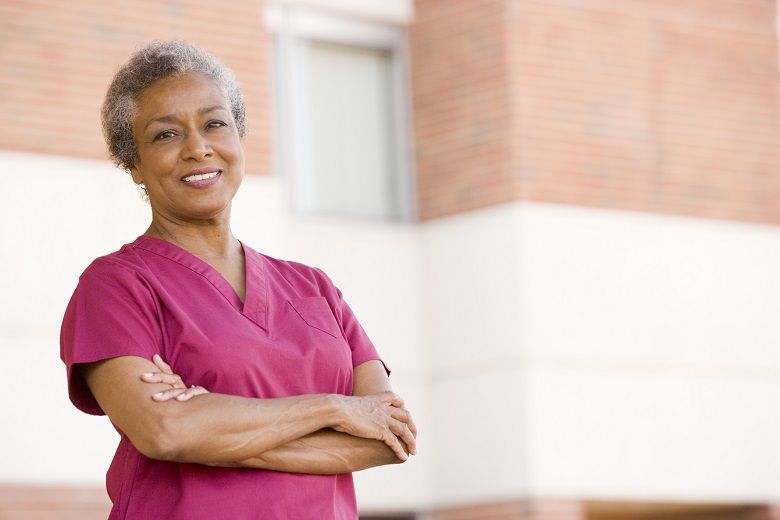 Both newly graduated and veteran nurses can potentially be the target of age-related discrimination, with some labeled as too young to practice medicine and others considered too old to handle the rigors of the profession.

Ageism in nursing can negatively affect self-esteem, psychological functioning, financial security and career growth. Age discrimination has been described as the last acceptable form of discrimination and an open secret in business. Despite federal laws prohibiting discrimination based on age, it is prevalent in many professions, including nursing. While ageism is primarily considered to impact the older generation, it affects the younger population as well, anti-ageism activist Ashton Applewhite said.

“Ageism isn’t either/or; it’s both/and,” she said. “In the workforce, it’s not whether older workers are better or worse than younger workers. It’s that we all need to work together to make an equitable workforce that’s accessible. The things that make a workplace comfortable for older workers also benefit everyone else.”

As nurse leaders, registered nurses (RNs) who earn Doctor of Nursing Practice (DNP) degrees are positioned to discourage age-based discrimination and focus on the positive aspects individuals have to offer to healthcare. Part of being an effective nurse manager is helping nurses of all ages meet their fullest potential.

Studies show about 1 million RNs are older than 50, meaning about one-third of the nation’s workforce will be nearing retirement age in 10 to 15 years. At the same time, millennials (born between 1982 and 2000) are expected to dominate the nursing workforce by 2030.

The U.S. Equal Employment Opportunity Commission (EEOC) defines ageism as treating a job applicant or employee less favorably because of age. The federal Age Discrimination in Employment Act (ADEA) and individual state laws prohibit discrimination and harassment against anyone age 40 or older. Some states also have laws that protect younger workers. The EEOC said discrimination could happen in any aspect of employment, including pay, job assignments, training, benefits and promotions.

In early 2018, the EEOC said the number of age-discrimination complaints filed by women and some minorities over age 65 has nearly doubled in the past few years, in some cases. At the same time, an AARP survey of almost 4,000 people age 45 and older found more than nine in 10 workers describe age discrimination as common.

National surveys that show an increase in age-discrimination complaints can reflect the consensus in the nursing community. Older nurses have been stereotyped as angry, out-of-touch and pushed to retirement, while younger nurses have been labeled as uninformed and amateurish and judged for their inexperience.

A recent Medscape poll of healthcare professionals found some medical clinicians, including nurses, feel they have been unfairly judged based on their ages. The survey, based on about 1,150 responses, found that:

Poll respondents who identified themselves as nurses said they had been victims of age discrimination as both young and older nurses. One respondent said she hid her years of experience on her resume because experts advise including 10 years of work experience.

“So it looks like I have done very little,” she said in response to the Medscape poll. “So frustrating. I plan to work until I am 70. How can I explain to employers that I have a long way to go yet! Don’t assume I will retire soon!”

Jennifer FitzPatrick, a gerontology instructor at Johns Hopkins University and noted author, said ageist attitudes toward both older and younger nurses are harming patients and the overall healthcare system. She said many patients, particularly those who are older, more easily identify with nurses of the same generation.

“Older nurses are often able to empathize with many of the issues their older patients are facing,” she said.

FitzPatrick said reverse ageism in nursing, or age discrimination against younger nurses, is hurting the profession as well. Millennials who are labeled as lazy, spoiled and entitled are more likely to leave an organization, increasing staff turnover.

FitzPatrick believes hospital administrators should create an environment where nurses are judged by their performance only, not age or any other factor. Managers need to stop age discrimination before it starts, she said.

“One way to do this is to be aware of the nurse’s generational affiliation but to not make assumptions based on it,” she said. “Administrators need to prioritize age diversity awareness and make training about it as strongly as they do other workplace inclusiveness initiatives.”

FitzPatrick said most people would never consider making derogatory comments about a person’s race, ethnic background or sexuality. However, many people are comfortable making jokes about age.

A component of being an effective nurse manager is addressing age-related discrimination before it begins. Researchers said the responsibility belongs to nurse managers to find out how to accommodate older nurses to retain them for their expertise and institutional knowledge.

Because of the influx of new nurses into the healthcare system, managers should work to keep experienced nurses on the floor, a study titled “Older nurses: A literature review on challenges, factors in early retirement and workforce retention” stated.

“It is also important for nurse leaders and human resource practitioners to be familiar with factors associated with early retirement and retention, such that appropriate strategies can be implemented so that more nurses not only ‘can’ but also ‘want to’ work beyond 65,” study authors said.

RNs who have DNPs and work as nurse managers or executives are positioned to help eradicate ageism in nursing, against both younger and older nurses. DNP graduates learn about essential nurse management skills including effective communication and conflict management to eliminate age discrimination in healthcare. An online DNP program allows working RNs to earn DNP degrees while continuing their professional duties.

“Claim Your Age”: Ashton Applewhite Gets Fired Up About Aging & The Workplace: Glassdoor

Have You Experienced Ageism During Your Career?: Medscape