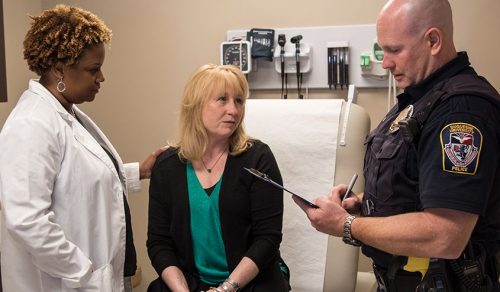 When sexual assault victims arrive at an emergency department, one of the first people they encounter is a forensic nurse who is trained to gather information from the crime. Forensic nurses who are certified as sexual assault nurse examiners (SANEs) follow scientific and legal procedures to collect evidence and ensure the quality of care for the victims.

For SANEs, other goals of sexual assault and rape testing include assessing and treating injuries, preventing sexually transmitted diseases and pregnancy, and offering psychological support. These specially trained nurses, who are certified by the International Association of Forensic Nurses (IAFN), work to address and validate patient concerns, minimize trauma, and promote healing. They follow procedures set by local jurisdictions, the IAFN, and the U.S. Department of Justice (DOJ) to collect information to be used in legal proceedings. A standardized process is imperative to ensuring victims get justice, experts say.

“A timely, high-quality medical forensic examination can potentially validate and address sexual assault patients’ concerns, minimize the trauma they may experience, and promote their healing,” the Justice Department said. “At the same time, it can increase the likelihood that evidence collected will aid in criminal case investigation, resulting in perpetrators being held accountable and further sexual violence prevented.”

Typically, sexual assault forensic exams are performed in hospital settings. The patient may be feeling a multitude of emotions at the time including anger, shame, fear, and anxiety. The exam must be performed with the utmost care and compassion while ensuring the work gets done, healthcare professionals say.

The U.S. Office of Justice, a branch of the DOJ that focuses on crime prevention, recommends victims be treated as emergencies at hospitals, meaning their treatment and caretake priority. The sexual assault evidence collection kit (SAECK), once called Vitullo kit after the Chicago Police sergeant who created it comes in a sealed package with an expiration date and directions for the multi-step procedure.

Experts recommend the SANE explain each of the steps to the victim before they occur.
The general procedure is as follows:

Once the exam is completed, all of the evidence must be packaged and sealed. The SANE must ensure the kit follows the chain of custody, or the chronological documentation that outlines how the evidence was handled and preserved. A reliable chain of custody is essential to any legal proceedings.

After the kit is completed and given to the proper authorities, the nurse examiner may be called into court to testify on the evidence provided.

The job of a nurse examiner doesn’t start and end with clinical care. Studies have found trained sexual assault nurses offer victims empathy and compassion and empower them with a sense of control. Researchers found the chances of a prosecution increases when the rape kit is performed by a SANE over untrained healthcare professional.

At the same time, the backlog of 175,000 rape kits throughout the United States and the shortage of forensic nurses have impacted the overall outcomes, victim advocates say. A study by the U.S. Government Accountability Office (GAO) found a severe shortage of SANE trained nurses.

“It is probably one of our single greatest challenges in sexual assault services,” Ann Burdges, CEO and executive director of the Gwinnett Sexual Assault Center in Duluth, Ga., told the Atlanta Journal-Constitution. “We simply do not have enough trained skilled sexual assault nurse examiners in place.”

For Registered Nurses (RNs), the first step to training as a SANE is taking coursework toward a master’s in nursing (MSN) with a specialty in forensic nursing. Classes that focus on criminal law, healthcare ethics, and forensic science are intended to prepare graduates for a challenging career in forensics. The leading programs prepare students for the SANE certification exam through the International Association of Forensic Nurses (IAFN).

Duquesne University’s online Master’s in Nursing program teaches forensic science skills that can be used in several forensic nursing fields, including as a sexual assault nurse. The university offers a collaborative program with its Cyril H. Wecht Institute of Forensic Science and Law, to meld the nursing curriculum with investigative techniques. The online MSN degree program lets professionals finish their coursework anywhere.

U.S. Department of JusticeOffice on Violence Against Women, “A National Protocol Sexual Assault Medical Forensic Examinations”
Office of Justice Program, “BEFORE THE EXAMINATION BEGINS – PROVIDING PATIENT-CENTERED CARE”
North Carolina State, Bureau of Investigation, Department of Justice, “Sexual Assault Evidence”
The Atlanta Journal-Constitution, “This is why no trained nurses may be available to help rape victims in Georgia”