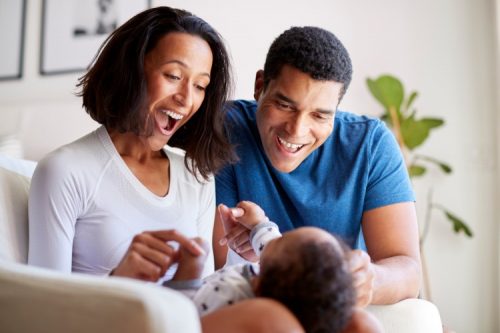 Infant mental health is measured by how a child develops socially and emotionally from birth to age three. Identifying potential mental health issues in infants helps families and their healthcare providers encourage the development of healthy social and emotional behavior in children.

From birth to three years old, a child’s brain develops rapidly. The child begins to learn how to relate to others and express and manage emotions. By identifying the potential for poor mental health at an early age, interventions can be started that will have a more powerful and lasting impact than interventions at later ages, as the Manhattan Psychology Group explains.

What Is Infant Mental Health?

The mental health of infants, toddlers and young children is as important as their physical health. In the nurturing and protective actions of parents and other caring adults, infants form the basis for other special relationships that are the foundation for development of cognitive, emotional and social skills.

Newborn babies have very little ability to self-regulate: their emotional expressions reflect their biological processes, as explained in the Handbook of Infant Mental Health.

Children rely on adults to help them experience, process and express emotions. The Manhattan Psychology Group points out that infants and children learn how to share and communicate their feelings within the context of family and community.

Brain development is affected by the child’s environment, relationships, and experiences. Disruptions to a child’s home and family circumstances can hinder the child’s ability to learn and relate to others. This can have lifelong consequences, according to Harvard University’s Center on the Developing Child.

Prevalence of Depression in Infants

Child and Adolescent Psychiatric Clinics of North America published a survey of the clinical research on the incidence of depression and anxiety in preschoolers and determined the prevalence rate of mental illness in very young children to be about 2 percent. However, the researchers concluded that insufficient evidence is available to link the incidence of preschool depression with depression later in life.

In their first few months, infants progress rapidly in their ability to express complex emotions such as sadness and anger. Toddlers begin to show empathy for others as they become increasingly self-aware, exhibiting self-conscious emotions that include shame, embarrassment and guilt, as explained in the Handbook of Infant Mental Health. As the child becomes more emotionally competent, feelings of self-efficacy, security and trust increase.

Among the aspects that may impact an infant’s mental health development are parental responses to the child’s emotions, socialization to promote emotional regulation and social development milestones in the first three years. While attachment theory remains the predominant model of infant mental health, other factors include parenting behavior, verbal engagement with the infant, parents’ mental representation of their past relationships with their parents and parents’ current relationship with their child.

As the Encyclopedia of Children’s Health explains, attachment theory states that the bond between infants and their primary caregivers has the greatest influence on many aspects of infant development, including:

According to attachment theory, infants organize their behavior around caregivers, who serve as the basis for physiological, emotional, cognitive and social growth. In their first year, infants reach many milestones in their emotional and psychological development:

Some children have a more challenging temperament than others, as Parents magazine points out. A Harvard University researcher determined that 40 percent of babies respond calmly to such stimuli as light and noise, while 15 percent to 20 percent of infants have a “more reactive temperament,” causing them to become upset by such stimuli and more difficult to soothe.

However, while parenting may not be effective in changing a baby’s temperament, thoughtful and consistent parenting does impact the temperament of older children. Parents can devise strategies to minimize the impact of a temperamental baby on families. Most importantly, parents and other family members can recognize that the cause of an infant’s behavior is beyond the child’s control.

How an Infant’s Temperament Matches Their Environment

A study reported in PLoS One found that children who exhibit high emotionality in their earliest years may need early intervention to avoid potential “adverse developmental pathways.” The study highlights the connection between an infant’s environment and their emotional and behavioral problems in childhood and later in life.

A child’s temperament can be affected by their family and social environment:

Signs of Disruption to Typical Mental Health Development in Infants

Diagnosing potential mental illness in infants is challenging because symptoms must be viewed in the context of their personal history, caregiving team and other unique circumstances. The Child Mind Institute lists 11 warning signs that parents should watch for when assessing their child’s mental health. These are the signs that apply to infants:

Separation anxiety disorder is defined as a serious emotional problem that causes infants to become extremely distressed when parents or caregivers leave. It is distinguished from normal childhood separation anxiety by the intensity and persistence of the infant’s response to the separation. The child may become anxious at the possibility of separation, and the condition may prevent the child from participating in normal activities.

The Conversation describes developmental language disorder as an “invisible disorder” because it is frequently misidentified or mislabeled. While some researchers believe the inability to express themselves verbally is the cause of some children’s mental illness, a recent study conducted by the University of Bristol identified a genetic link that affects a child’s language ability and mental health.

Some infants experience a loss of language skills and other social capabilities between the ages of 15 months and 24 months, as the American Academy of Pediatrics explains. Behavioral regression is one of the early signs of autism spectrum disorder (ASD), along with differences in the way infants develop body gestures and pretend play.

Extended Periods of Difficulty or Stress

Babies are not immune from the high levels of stress created by the COVID-19 pandemic, as PublicSource reports. Infants need to develop at least four secure relationships, according to a licensed professional counselor cited in the article. The pandemic has made it more difficult for infants to enter into those relationships, and this can cause a baby to experience “toxic stress,” which differs from “healthy stress” related to learning to walk, talk or toilet train.

Toxic stress is caused by caregivers failing to give a child sufficient attention, and because an infant’s mood often mirrors that of their caregiver, increased depression in a caregiver can lead to depression in infants. The stress may also impact the child’s brain development because the stress causes hormones to overwhelm the child’s neural system. This may prevent the infant from crawling, exploring and doing other activities that spur development.

When potential mental health issues can be identified at an early age, interventions designed to prevent and treat the problems tend to be more effective. Strategies for responding to indications of mental illness early include discouraging negative behaviors and promoting healthy social environments for young children.

Researchers have determined that postnatal interventions to support mothers improved the development of infants’ brains in the region associated with memory and stress modulation. Conversely, prenatal maternal stress led to decreased development in a region of the infant’s brain associated with emotional regulation.

How Infant Intervention Strategies Differ from Those for Other Developmental Stages

Infants and young children reach developmental milestones at different rates. Early intervention strategies are intended to assist infants and toddlers who experience developmental delays, as explained on the disabilities services site Understood. The Individuals with Disabilities Education Act (IDEA) ensures that families are able to access the services their young children need in five areas:

Studies have shown a link between good mental health and positive physical and social environments for infants and their mothers from prenatal development through early childhood. Mental Health Colorado offers an Early Childhood Mental Health Toolkit that identifies six steps to change.

In addition to ensuring a positive environment for mothers, infants and their families, identifying and addressing negative aspects of a young child’s environment is also important. Mental Health America describes the factors that impact an infant’s brain development during this crucial period.

Intervention strategies allow parents and healthcare providers such as nurse practitioners to work together to mitigate the potential effects of mental health issues in infants. In recent years, the new position of infant and early childhood mental health consultant (IECMHC) has gained popularity. The Substance Abuse and Mental Health Services Administration describes the position’s qualifications:

Infant and early childhood mental health consultation has been shown to promote positive emotional and social development in young children. SAMHSA has identified national competencies that parents can use to determine the qualifications of healthcare professionals offering IECMHC services.

Nurse practitioners use their specialized skills and experience to provide parents and caregivers with the help they need to identify and address potential mental health issues in young children. The Arizona Healthcare Cost Containment System lists the interpersonal skills that practitioners require to assess and treat infant mental health.

Children reach specific developmental milestones at stages throughout their infancy and into adolescence. The Centers for Disease Control and Prevention explains that a child’s developmental profile charts the developmental milestones the child has reached at ages from two months to five years old. MedlinePlus presents the normal growth and development periods for children from birth through age 15. For example, a four-month-old baby’s sensory and cognitive skills typically include the following:

By tracking a child’s developmental milestones and comparing them to the statistical norms outlined in the CDC’s timeline, parents and healthcare professionals can identify potential delays in a child’s progress. If a child misses a milestone, a doctor, nurse or other professional may conduct a developmental screening that includes a brief test and questionnaire to determine whether a developmental evaluation is required. The evaluation is conducted by a trained specialist in child development who can diagnose a developmental delay and take steps to prepare the child for social and educational settings.

The Role of Nurse Practitioners in Promoting Infant Mental Health