Social Media Influences on Alcohol Use 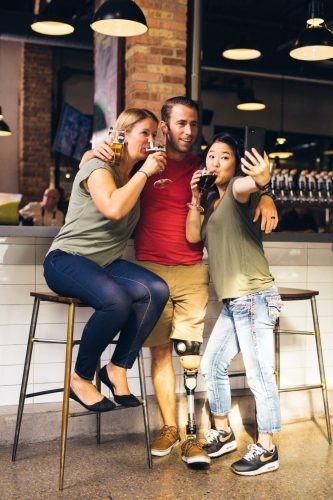 Partying and documenting good times on social media are popular extracurricular activities for many college students these days. College — when undergraduates are freed from the constraints of being at home with their parents — is a prime time to experiment with alcohol, whether it be at frat parties, sporting events, off-campus bars or dorm room gatherings.

A nationwide survey conducted by the National Institute of Alcohol Abuse and Alcoholism found that almost 55% of full-time college students between the ages of 18 and 22 drank alcohol in the past month and about 37% engaged in binge drinking,  which involves imbibing a lot of alcohol in a short amount of time, over the same period. Many college students feel compelled to capture and share their drinking with peers in countless Instagram, Snapchat, and Twitter posts.

Research has shown that beliefs about others’ alcohol consumption are strongly related to students’ own drinking. Students who view their friends’ alcohol-infused posts are likely to drink more themselves and to post more alcohol-related content, which, in turn, causes others in their network to do the same. By establishing this positive feedback loop, social media cultivates social norms — what students perceive to be normal in terms of drinking — that impact an individual’s drinking and their perceptions of how much others drink.

The combination of drinking offline (e.g., drinking at a college party) and seeing people drink online via social media may serve to amplify perceptions about drinking, causing students to think their peers drink more than they actually do.

Social media influences on college students’ alcohol consumption is a research focus of Dr. Mai-Ly Nguyen Steers, an assistant professor in the School of Nursing at Duquesne University. An applied social psychologist, Dr. Steers studies psychosocial factors, particularly social norms, in relation to drinking and the influences social media has on health and well-being. Her current research, supported by a five-year grant from the National Institute on Alcohol Abuse and Alcoholism (NIAAA), combines these two areas of expertise.

Steers’ aim is to develop novel interventions to target at-risk drinkers who are also avid social media users. “We try to lessen their alcohol consumption by calling attention to the fact that the norms are skewed,” she explains.

Having grown up with the internet, today’s college students have become social media aficionados — experts at creating different content for different platforms such as Snapchat, Instagram, Twitter, and Facebook. In her research, Steers has observed that students are adept at cultivating the type of alcohol-related content they choose to post to a particular platform due to implicitly conveyed norms surrounding the given platform.

For example, Snapchat tends to be where all the “wild and crazy, as well as ordinary” (e.g., drinking beer alone at home) alcohol-related content is disseminated, she explains. By comparison, Steers says, students appear more likely to post alcohol-related content conveying social status (e.g., students drinking in large groups) or economic status (e.g., imbibing expensive cocktails by the beach) to their main Instagram profile page.

Among social networking sites, Steers has found Snapchat to be the platform of choice for students disseminating alcohol-related content because Snaps and Chats often disappear, and users can direct-message smaller groups of like-minded people.

By comparison, college students post to Facebook the least, and the content is generally more benign, socially accepted types of drinking (e.g., toasting at a graduation celebration), says Steers. That’s probably because so many parents and grandparents are also on Facebook.

“We are learning more and more that social media is now the lens through which young people view the world,” says Steers who, with a background in psychology, health, and communications studies, researches the influence of social media on addictive behaviors in college students.

Young adults (ages 18 to 29) were among the earliest adopters of social media and continue to be its heaviest users, according to Pew Research Center.   social media use isn’t a problem for most people, as with drugs, alcohol and gambling, some users become addicts.

Indeed, psychologists estimate that as many as 5 percent to 10 percent of Americans fit the criteria for social media addiction, according to AddictionCenter.com.  Children and young adults — whose brains and social skills are still developing — are especially at risk.

Resetting Social Norms Around Alcohol Use

If social media is the lens through which young people view the world, seeing a distorted picture there can be harmful. Consider how social media spreads misinformation and can skew our view of politics. For instance, if a user were a Hillary Clinton supporter in the 2016 presidential election, most of the material they might have viewed on their social media feeds might have been pro-Hillary posts. Thus, the idea that Donald Trump would win the presidential election seemed out of the realm of possibility. In much the same way, says Steers, the content that peers post to social platforms can distort college students’ perceptions about alcohol use on campus by creating an echo chamber that reinforces misconceptions. Steers’s NIAAA-funded research project collects data on drinking and alcohol-related posting from college students to better understand social media influences in hopes of resetting perceived norms around alcohol use.

For example, researchers ask a female student at Duquesne University how many drinks per week she thinks other females on campus drink, and to report how many drinks she consumes each week. Then they inform her of the average number of drinks per week actually consumed by other female students on campus. If the numbers are high (e.g., she thinks the average Duquesne female consumes 12 drinks per week), “we try to lessen their alcohol consumption by calling attention to the fact that [her] norms are skewed”. That is, less drinking is taking place on campus than social media leads students to believe. The ultimate objective of the study is to provide standardized assessment tools that can be utilized in innovative, low-cost interventions for clinicians and researchers working in the alcohol field.

Colleges have gone to great lengths to combat on-campus underage drinking, which can contribute to a number of problems that include poor academic performance, sexual assault and death by suicide or accident, according to the NIAAA. Still, college drinking remains a significant public health problem, one that Steers hopes to combat by resetting norms around college alcohol use.

Steers’s long-standing interest in studying the impact of social media influences on the psychological health of young people can be seen in her 2015 Houston Chronicle op-ed, “Why Facebook Can Be Depressing, and What You Can Do About That,” published while she was pursuing her PhD in social psychology at the University of Houston.

The article told of her younger sister’s feelings of depression after viewing pictures posted by her friends to Facebook of a dance she didn’t attend. Her sister’s experience inspired two studies using a sample of over 300 American university students that found the more time students spent on Facebook, the more likely they were to experience depressive symptoms due to social comparison.

The results of the study — “Seeing Everyone Else’s Highlight Reels: How Facebook Usage Is Linked to Depressive Symptoms” — were published in the Journal of Social & Clinical Psychology. Research by others has also found that posting about alcohol use on Facebook and other social media platforms is associated with increased offline drinking behavior.

Explore an Online Master of Science in Nursing

According to the American Psychiatric Nurses Association, the U.S. struggles with a shortage of qualified professionals trained to treat the growing mental health needs of at-risk youth. Nurses looking to advance in their careers and address the critical need to provide care to individuals struggling with addiction and other mental and physical health issues should explore Duquesne University’s online Master of Science in Nursing and Psychiatric-Mental Health Nurse Practitioner degree programs.

AddictionCenter, What Is Social Media Addiction?

DigitalMarketing.Org, “How Much Time Does the Average Person Spend on Social Media?”

Houston Chronicle, “Why Facebook Can Be Depressing, and What You Can Do About That”

Usage Is Linked to Depressive Symptoms”

Journal of Substance Abuse, “Peer Influences on College Drinking: A Review of the Research”