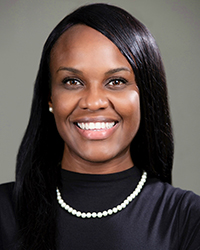 When Dr. Marie Smith-East isn’t seeing patients or teaching, one of her favorite activities is ringing bells for the Salvation Army every holiday season. She follows after her great-grandparents, who were missionaries, and her grandmother, a nurse who transports medical supplies yearly to her native Jamaica.

In many ways, Smith-East is a missionary in her professional life as well. She has spread the word on various areas of health, from access to care for schizophrenia to helping parents discourage teenagers from vaping.

She’s done it while earning two bachelor’s degrees, two master’s degrees, and two doctorates: a DNP in clinical practice and a Ph.D. in research. “Education is highly valued in our culture and in my family,” she says.

Since 2020, Smith-East has been on a mission of educating nurse practitioners as a clinical assistant professor and director of the Psychiatric-Mental Health Nurse Practitioner Program at Duquesne University.

High achievement is another trait that runs in Smith-East’s family. Her mother Hyacinth is an emergency room nurse who’s also a classically trained opera singer and directs the Jamaica Nurses Association choir in South Florida.

Smith-East’s own healthcare journey began as early as high school in North Miami Beach, where she worked on a team to design a “batholift,” a device to help people with disabilities get safely in and out of bathtubs.

At the University of Florida, Smith-East earned her first bachelor’s and master’s degrees, in an accelerated four years, in health education and behavior. Hungry for hands-on healthcare experience, she also got certified as an emergency medical technician. She later earned a second master’s, became a registered nurse, then continued to become an advanced practice registered nurse practitioner.

Working one night in intensive care, she had a career-changing experience with a patient having a psychotic episode. Once the doctor instructed her to administer an antipsychotic medication, the patient improved overnight.

“It was like night and day,” she recalls. “Something clicked. From that day, I wanted to do psych.”

Smith-East’s involvement with psychiatric patients led to a specific interest in schizophrenia spectrum disorders, which she believes are widely misunderstood.

Rather than being classified as a mental illness, she says, schizophrenia should be viewed as a brain illness. Patients typically have an enlarged third ventricle of the brain. Reclassifying the condition, she says, could remove much of the stigma around schizophrenia.

“If we talked about it like diabetes, people would be more open to talking about it and getting treatment,” Smith-East says. “No one wants to be seen as ‘crazy.’”

Working at a community clinic, she became aware of another aspect of schizophrenia: the role of psychosocial factors in access to care. Her interest was sparked by a patient who had quit taking medication because he had run out of peanut butter to take it with.

For her Ph.D. dissertation, she studied how such factors affected mental health patients, their adherence to treatment plans, and their outcomes. Examining a community clinic with several satellites, she correlated patient records with geographic information systems data, such as the distance each patient had to travel to keep an appointment.

She found that several factors improved adherence, including having insurance and travel time under 15 minutes. Offering non-medical services such as life coaching also increased follow-up visits.

As with her dissertation, Smith-East’s chief research goal is to solve problems. “It’s not just to acknowledge that there are disparities,” she says. “It’s also to give solutions on how those might be mitigated.”

In another paper, she suggests ways to improve internet access for underserved clients: directing them to churches and libraries with broadband or offering it on mobile health buses.

A recent project guides parents on how to talk with adolescents about vaping. Besides presenting information about health risks, she advises asking teens about their motivations. “Target certain goals that a child may have and how vaping could potentially influence the goals that they would like to achieve,” she says.

If mental health research has been a recurring theme for Smith-East, another has been providing services over the internet. Since becoming a psychiatric-mental health nurse practitioner in 2013, she now sees most of her patients through telemedicine appointments. They’re convenient for patients, as well as for her.

“A lot of practices are a quick in and out,” she says. “In our practice, patients like having time dedicated to them. They feel like they’re really being heard if they have any questions or concerns.”

Since 2009, she’s also done much of her teaching online, helping her to juggle educational duties with seeing patients and doing research.

That background made Smith-East a natural fit when Duquesne was starting up an online program for psychiatric-mental health nurse practitioners. She teaches three courses and helps design others, all while seeing patients one day a week and serving in groups such as the Addictions Council for the American Psychiatric Nurses Association.

With the diverse kinds of jobs she’s done — and still does — she sees the diversity of settings as a key benefit of becoming a psychiatric-mental health nurse practitioner.

“You can work in community mental health, inpatient units, substance abuse units, or eating disorders areas, or you can even start your own private practice,” she says. “There’s a shortage of nurse practitioners — and will probably be even more so after the pandemic.”

Transition to a Career as a Psychiatric-Mental Health Nurse Practitioner

With the stresses of the COVID-19 pandemic, psychiatric-mental health nurse practitioners are in high demand. At the same time, many states are expanding the areas in which nurse practitioners can practice independently from physicians. An online program such as the Psychiatric-Mental Health Nurse Practitioner Post-Master’s Certificate at Duquesne University’s School of Nursing allows nurses to prepare for that career transition while still working in their current roles.

The curriculum includes five courses on advanced practice nursing, as well as six specific to psychiatric care, including Psychopharmacology and Serious Mental Illness/Substance Use Disorders Across the Lifespan. Explore how this certificate program can open doors to positions of greater opportunity and autonomy while providing critically needed care.

How to Become a Nurse Practitioner